Andrea’s little sister. A bright, creative, intelligent energy-bomb. Liz is crazy smart for her age, but unlike her sister, she has no desires for the spotlight... although she’s never too shy to make a snappy comment to Andrea! Liz really looks up to Olivia, and the two of them love to geek out together and speak in such a tech-savvy language that no one else can understand! Except perhaps for Zobo, who Liz ADORES and who she is constantly trying to win over and prove that she is as competent as Olivia. But despite her intellect, Liz is learning to accept the fact that she’s still just a kid – and that’s not a bad thing. Her time will come. It’s okay to enjoy childhood for now!

Not so crazy about: Clowns, being treated like a baby

Liz is Andrea's little sister. She is around eight years old.

Andrea tried to encourage Liz to be like her and become a musical performer or star, but Liz became more interested in Olivia's science experiments instead. So then, Andrea accepted it's okay if her little sister isn't like her. This only happened after Liz helped all the friends in Sister Act.

Liz is a member of the Junior Science Club that Olivia teaches. In one of the comics is mentioned that Liz loves chemistry.

In season 2, Liz starts making apps for tablets and smartphones.
So far, she's created StalkTalk for plants and Mearff for animal-human translation.

As revealed in Secret Friend , she doesn’t like getting distracted with her work when she moves the girls away. She also likes to make fun of her older sister as seen in Escape from Trash Island , she describes the load of trash like someone cleared out her sister’s room and threw it in the bay.

In one of the magazines, on the beach the girls meet a blue-eyed girl with blonde short hair, and Liz notes it's her friend Analise.

Of course, she pulled it anyway.

Liz in the Friendship House.

Liz with the Junior Science Club.

Liz has never heard Jeremy Door singing before and apparently, she does not enjoy it!

Liz with Olivia and Mia.

Liz and Donna dancing at the Grand Prix victory party.

Eating with one hand, using her phone with the other, Miss Junior Phoneaholic 2020. 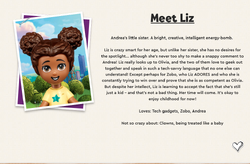 Liz running away from a spooky shadow!
Characters
Community content is available under CC-BY-SA unless otherwise noted.
Advertisement