When the girls plan a surprise party for Stephanie's birthday, they discover it's not easy keeping a secret.

It was the last day of school and everyone was excited for summer vacation or it seemed, Stephanie suggested to her friends that they all go to the beach but her friends nervously and suspiciously said that they were busy and had other plans, Emma made up an excuse saying that she has karate class after school that day which made Stephanie sad so she lied saying that she had plans too when actually she didn't. When her friends left school they were talking about keeping Stephanie's surprise birthday party a secret. When Stephanie was on the way home alone she went to a pet store with Daisy looking for a pet house for Daisy. She couldn't decide so she tried to find Emma in her karate class but karate wasn't on that day, it is actually on Wednesdays much to Stephanie's surprise. Stephanie realized that Emma lied and was even more desperate to find her. Then she sees Lacy. Lacy asked if she took karate, Stephanie told her that she doesn't do karate, and that she is looking for Emma and asks Lacy if she has seen her, Lacy said "and I thought you two are friends". Stephanie replied with "I'm sure there's a good explanation". Lacey said "of course" and walked away. Meanwhile Stephanie's friends plan ideas for the surprise party in the tree house and decided to the throw the party at Heartlake City Pool and they rehearsed their dance. Stephanie walked by the tree house and spotted her friends dancing without her. Feeling left out Stephanie checked her phone for any texts about dancing in the tree house but to her dismay there were no texts about it. Stephanie sadly ran away from the tree house.

Mia and Olivia buy a pet house for Stephanie but as they walk out of the store Stephanie spots them and calls over to them. Mia and Olivia run away. Later on Stephanie throws stones in the river and when Lacey arrives Stephanie tells her that her friends lied to her and they had fun dancing in the tree house without her. Stephanie feels that Lacy is her only true, honest and loyal friend. Stephanie decides to put everything straight for tomorrow since tomorrow is her birthday after all.

But her friends act even more suspiciously when her birthday arrives, as Stephanie spy's on them she notices that her friends took secret selfies and Emma acted as if she forgot Stephanie's birthday. When Emma walked away, Stephanie angrily said "did I just get ditched on my birthday?". The girls realize that they forgot to invite Stephanie to the party and start thinking about how to invite her without ruining the surprise. Meanwhile Stephanie rides with Lacy but she sees the party that her friends attended without inviting her she walks angrily towards the party. When the friends panicked Emma said "we don't want this party to be a total bust" Stephanie said "like our friendship" grabbing her friends attention. Stephanie explained all of the secret fun things they did that excluded her and that made her feel sad, lonely and left out but they explained that the secret is for the surprise party they made for her. Stephanie opened the presents and felt happy and thanked them. Stephanie noticed Lacy is getting left out so she told her that she can come, stay and enjoy the party. The episode finished with the five Friends dancing together to Best Friends Forever.

Ever get the feeling you're being watched?

This is a new one.

They certainly haven't forgotten anything...

Except to invite the birthday girl! 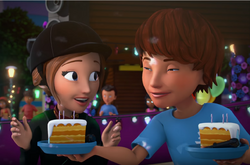 Lacey's true self, exposed by cake.
Community content is available under CC-BY-SA unless otherwise noted.
Advertisement