Olivia
Zobo is a recurring character of LEGO Friends.

Olivia invented Zobo in her workshop as a science fair project. She controls him with a remote. He likes fixing things, and can be found joining the girls on their adventures all around Heartlake City. Sometimes he seems a bit funny, when he doesn't understand human things.

Olivia also created a mini ”Family” for Zobo, making Zobo the father, Zuzu the mother, and Zobito the son (kid). Zuzu is not commonly found in most episodes, but Zobito and Zobo are. Zobo helps Olivia in her science projects, and Olivia is constantly updating him with new, interactive features.

Zobo has appeared in nearly every episode of LEGO Friends (TV Series) and LEGO Friends: Girls on a Mission 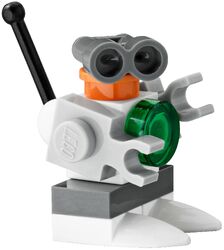 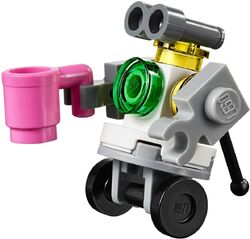 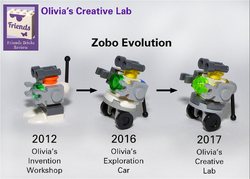 The evolution of Zobo. 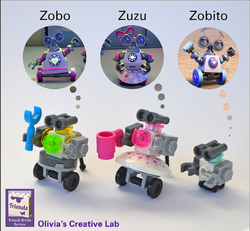 This guy tried to steal the Mission Vehicle, so one of his punishments is a severe earpinching from Zobo

Zobo acting as a light source for Olivia.

Zobo and Rumble in "Attack of the Alvahbots".

Cast and crew assembling on stage

and now joined by the director.

Zobo consoling Andrea after she can't find her family locket.

Rumble riding Zobo as he cleans the floor.

Zobo and Zoe sitting on a park bench.

Zobo looking at a moon rock.

Zoe and Zobo reading.
Add a photo to this gallery
Characters
Retrieved from "https://legofriends.fandom.com/wiki/Zobo?oldid=39773"
Community content is available under CC-BY-SA unless otherwise noted.